We started Vice Presidents Anonymous accidentally over drinks after work. We were grousing about the long hours we were spending and how things were inefficient and not getting done and how certain whack-jobs kept getting ahead. It was in 1981, before any of us was actually a full Vice President. So, in a way, the birth of Vice Presidents Anonymous was the product of career expectations. It was actually a bad time to be having career expectations. The U.S. was just coming off inflation, record high interest rates (18% for a mortgage), the bailout of Chrysler, the Three Mile Island nuclear meltdown, the second collapse of the Savings & Loans, the Iran hostages, the Russian invasion of Afghanistan, and the death of once great household names like Singer, Zenith, International Harvester, and Pan Am. The Fortune 500 was decimated. But our banks weren't. We were pretty sure we'd be getting our VP titles within a year or two, and we'd shoot up the ladder from there.

So we focused on what was of primary interest to us at the time: (1) We developed Awards for those in the office and the industry who demonstrated exceptional levels of Aggression and/or Imbecility;  and (2) since we were transfixed by the relationships between men and women in banking, we produced  No Fault Dating for Women on the Fast Track. We couldn't publish any of it, of course, because we would have been fired.

Just when things were starting to look up economically, the whole thing cratered all over again--Mexico and Argentina defaulted, the biggest U.S. corporate lender--Continental Illinois--tipped over, the Japanese bought Pebble Beach, the whole of Texas slid down a dry hole--and took Kansas with it, Mike Milken and the leveraged buyout MASTERS of the UNIVERSE bought out our whole client base, the Rust Belt shipped heavy industry overseas for good, and the Savings & Loans went down for the third and final time. The whole of industrial America got laid off. This time the banks got hit. Yes, we all got our VP titles, but within 10 years the kind of banking we did--long term corporate relationships--was dead, and all the banks we worked for got merged. Everything went transactional--investment banks, leveraged buyout firms, hedge funds, private equity firms, pension funds--they all won out. Investors took over the boardrooms, and turned everything--products, customers, workforce, shop floor, smokestacks, parking lots--everything--into discounted cash flows.

By the end of the 90s when the last of our big banks merged, those long, reputable, and well-compensated careers we'd all had--they all disappeared too! Everyone had to scramble for one of the ever diminishing number of musical chairs. If you didn't get a chair you became a consultant, doing similar work at a fraction of what you'd been making. The company softball leagues shut down, along with corporate ethics, the company picnics, and those great all-night Christmas Parties.

In response to all of this, Vice Presidents Anonymous came up with a raft of unpublished publications: How to Fire Your Boss, It's a Jungle in Here, Off the Organization, and Mother Goose for Young Bankers, We also developed the Corporate Scorecard--an early warning system for quantifying the likelihood of your company failing over the  next three years. Of course, we still couldn't publish any of it. We'd have been fired--effective immediately--with a perp walk thrown in for effect.

Then came the year 2000. Silicon Valley arrived. Technology changed the speed and precision of everything. Since Silicon Valley was run by bona fide nerds, 50 years of corporate socialization went out the window. People turned in their Armani suits with their cuff-links and collar pins and rigged themselves up with black turtlenecks, Levis and sneakers. Women were sent back to the bottom of  the corporate ladder. Companies didn't have to do research and development anymore--their customers did it for them (unwittingly). Spending one's newly minted billions also changed: it was out with the Bentley and castle in the Cotswolds, and in with bicycles and vineyards in Napa. Corporate loyalty evaporated and the gig economy triumphed. No more 9 to 5, it was all 24/7. Every man for himself. Of course everyone still needed to borrow lots of money, so those of us who were left in the banking business adjusted accordingly.

The team came up with Bottom Line Fever,  Wall Street Woman: A Dating Life, and Hans Arthur Andersens' Fairy Tales. Following the Debt Crisis of 2008, the team produced Alice in Credit Land, The Lay-off Monologues, and Outsource Nation: the U.S. on 5 Pesos a Day, We also created a number of case studies based on real corporate disasters, and a new epic ballad: Going Down with a Blip, THE WRECK OF THE FOUNTAINHEAD. Again, all of these were created just for our friends and colleagues in the corporate bankers' "underground."

About a year ago, it suddenly occurred to us that a lot of corporate executives probably face the same kinds of challenges we've all been facing in the banking industry. There aren't any statistics on it, but with all the economic turbulence of innovation, globalization, and capital flight--on top of the devastating infestation of the Quarterly Earnings Disorder--we figured there must be at least a million executives or so out there across the American business spectrum who know exactly what we're talking about--but, unlike us--have no one to talk to. It occurred to us also that since two of our team had retired, they couldn't be fired if we took it all public. So here we are, after over 30 years, coming out into the light.

The things our team has developed since we started is presented on this website. Most of the unpublished books are now published and available in the Store tab. More of our work is on the way. But this whole thing isn't really about us.  We created this Vice Presidents Anonymous platform so that others can be as helpful to one another as we have been to each other, and also to have as much fun as we have had. We invite you to submit posts for any kind of item on this site (see the Executive Sharing tab) and/or on our facebook, instagram and message board. Feel free to join our conversation! (see the Membership tab--it's all free!)

One more thing: If you've read this far, you already know that Vice Presidents Anonymous is not just about having a good laugh and getting revenge. You already know that what we are about is exactly what you are about: maintaining high standards and getting the job done right. We are the ones who make sure products work and services perform, that investment is rational, production is consistent, business is sustainable and markets can be trusted. The people and the plans that wreck the proper conduct of business deserve what we dish out. They deserve to be remembered and they deserve to be held up for scrutiny--and, where appropriate, ridicule. Lord knows, we've all paid the price of admission.

Starting NOVEMBER 27, 2020 The Friday after Thanksgiving Every Year 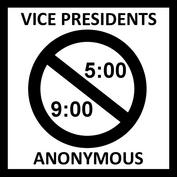 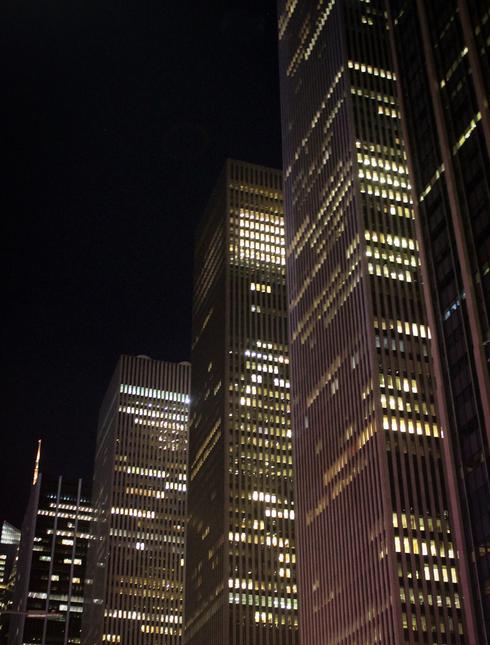